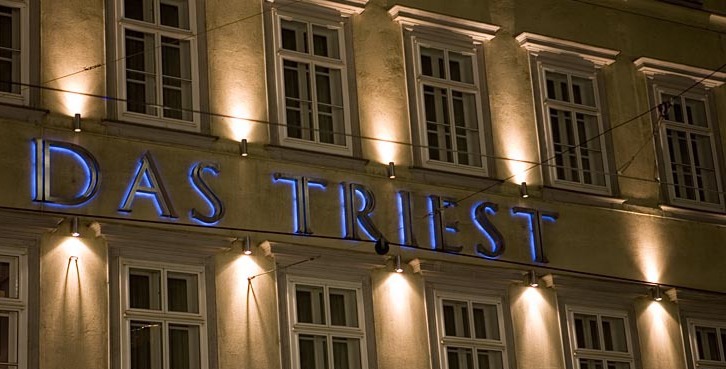 the design of the hotel in Vienna

Experience the more than 300-year-old history of the design hotel during your trip in Vienna, which today reflects in a modern and timeless decor.

History and design of the boutique hotel in Vienna

The name of the design hotel DAS TRIEST goes back to the horse-drawn mail coach route between Vienna and Trieste, established by archduchess Maria Theresia, for which the hotel served as staging post. DAS TRIEST, with a history of more than 300 years, is now the premiere address for guests who appreciate first-class hotel and restaurant design.

The hotel in Vienna opened in 1995, designed by the english architect Sir Terence Conran. His design is inspired by Trieste, former city of the Austrian empire, which you will notice by nautical design elements througout the buillding.

For the annex of the hotel the architects Wehdorn got the commission to design the new rooms.  They worked with reduced, geometrical structures and the design of a distraught pattern. This work is autonomous next to Sir Terence Conrans which creates an interesting and creative design-dialog.

The old vaulted stables have become salons, suites and conference rooms with state-of-the-art technology while featuring the distinctive flair of DAS TRIEST. The newly created event rooms Novara offer a light-flooded atmosphere and a breathtaking view over the city centre of Vienna.

The style reflects a commitment to contemporary design as well as to high-quality materials and workmanship. Unlike the mass-produced interiors typical of hotel chains, the rooms and suites at the boutique hotel DAS TRIEST have a unique look of their own.

The furnishings specially commissioned from well-known designers blend with the works of art and accessories at DAS TRIEST to give this Viennese boutique hotel its own unique signature style, while the lighting concept ensures a welcoming atmosphere throughout the building. Great attention has also been given detail, as demonstrated by the delightful flower arrangements on display in the building.

Our hotel in Vienna